Get rid of Moles – Guaranteed!

Moles can cause havoc to gardens, playing fields and agriculture. Mole trapping is our specialty, and we use only the highest quality traps to ensure humane removal.

For one-off mole removal in smaller areas, we usually operate on a ‘No mole, no fee’ system which works because of our proven mole trapping skills.

If you would prefer a fixed price for a job, just let us know.

For larger areas of mole damage, or where moles are likely to be a persistent problem, it may be beneficial for us to visit on a regular basis to keep the area clear of moles. Regular visits to monitor and control moles may work well with a large garden, estate, sports pitch, public amenity area, churchyard, paddock or field. Our service visits offer very good value for this type of control.

If discretion is important to you, mole trapping can be carried out with with traps hidden from the public view. This is particularly useful in public areas such as golf courses or playing fields where tampering with the traps may occur. The traps used in these areas allow the area to be used as normal.

Safety is always top priority, and trapping moles is no different. We will not endanger any person or animal during our trapping, and being from a farming background, we understand livestock. 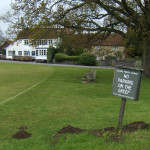 Moles about to ruin the cricket ground in Tilford, Surrey 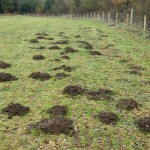 Whatever your mole problem, we are happy to advise on the best solution for you.
We trap moles in West Surrey, East Hampshire and West Sussex, but will travel further if required.

Why remove a mole Infestation?

Moles dig their tunnels, and the subsequent soil they throw out as molehills is what usually causes a problem, but collapse of the ground and failure of plants is also an issue. They find their food within the tunnels, so have to constantly maintain the system of ‘runs’ in order to guarantee a food supply. The activity is usually worse in early spring and autumn.

The excess earth pushed above ground by garden moles causes damage to lawnmowers and the underground tunnels create a trip hazard when they collapse. The newly dug soil presents an opportunity for weeds to grow.
Moles can destroy a lawn with their digging ability, and the tunnelling will eventually kill grass and plants in flowerbeds. Garden moles are a most unwelcome garden pest! Get rid of moles in the garden, call today!

Molehills create an opening for weeds to proliferate, and can damage some agricultural machinery.
Livestock is particularly vulnerable to the trip hazards of tunnel collapse and molehills.
Silage and hay crops can be spoilt by earth being harvested along with the grass. This can cause listeriosis in sheep.
Burrowing by farm moles will stunt crop growth or kill the plant.
In the past, there were professional mole catchers who travelled the estates trapping moles. Today, the molecatcher is making a comeback, so get in touch for a quote.

Where horses are kept, moles are a serious problem. Call now to get rid of those moles!

How do we get rid of moles?

Trapping is the most humane and reliable method of mole control. It is a specialist skill that we have been honing for many years. Although mole catching is sometimes difficult, it is not much more difficult than trapping anything else, provided some care is taken when setting it up. If a mole is alerted to trapping attempts, it can become very evasive – something that becomes obvious when we are the second company to be asked to control them when others have failed!

Trapping moles can be carried out safely and unobtrusively by a professional mole trapper, often leaving the ground still in use for animals or recreation.

Gassing is another option, but comes with risks and unpredictable results. We no longer use this mole control method as we consider it cruel as well as being expensive.

Burrow blasting is a recent development whereby an explosive gas mixture is pumped into mole runs and the gas ignited. The explosion collapses the mole runs and tunnels. This method is illegal if there is a mole (or any other animal) in the mole tunnel, which makes the process rather useless in terms of mole control methods.

Sonic devices tend to make moles dig more tunnels nearby, and from experience are ineffective at clearing a garden of moles.

There are hundreds of old wives tales about how to get rid of moles, but more often than not, any disturbance encourages the mole to increase it’s digging activities, causing more molehill and tunnel damage.

Moles are a generally solitary, territorial mammal that lives permanently in tunnels in the soil. They rarely come above ground. They feed on insects that they come across when digging, or that drop into the tunnel system. The main food is earthworms.
Moles usually breed once a year in the spring. The gestation period is four weeks, and the young leave the nest at five weeks old.